The Challenge Field of Glory Renaissance 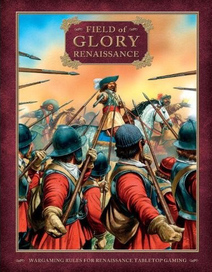 The rules to be used are FOG: RENAISSANCE. See the Slitherine forum for the latest errata.

If the currently planned revision to the rules is published in sufficient time, the theme will be amended and special rules will be dropped unless included in the new version.

To book in you need to first register on the UKGE website and then navigate to the "Miniatures Events" page on the "Events" menu to select your chosen competition.

All Competitions are priced at £16 for 2-day events, and £8 for 1-day events but you will also need to buy a UKGE pass for the days you are planning on attending as well.  These are £22 for two days, with other options (3 days, family entry etc) also available for those of you who want to take part in some of the other UKGE events.

Ticketing is being handled by the UKGE team, and so if you have a query about ticketing please contact them via their Ticketing FAQ page , as we will be unable to help with any queries relating to tickets

For details on themes and permitted armies for each period see the UKGE website or the BHGS Challenge pages on the BHGS site.