Britcon 2022 : Bigger, Brighter - and now in Nottingham!
The UK's Biggest Historical Wargames Convention moves to the heart of the Lead Belt ​

​Britcon 2022 is sponsored by  Forged in Battle 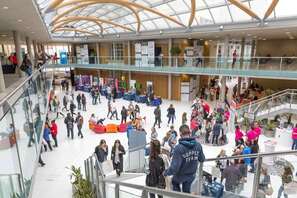 After more than a decade in Manchester, 2022 will see The British Historical Games Society's premier event Britcon move to the heart of the UK's "Lead Belt"  and a new home at Nottingham Trent University's City Campus

Britcon encompasses three days of competition and organised play together with a two-day trade show, and this year will run over the Friday-Sunday of the weekend of 12-14 August, maintaining its longstanding "2nd weekend in August" date in the UK wargaming calendar.
​

The all-new venue at Nottingham Trent is a much larger, more modern (and well lit and ventilated!) space than Britcon's previous home in Manchester, allowing us to stage all of the main competition events together on a single floor as well as opening up a significant expansion into more non-competition gaming and a much larger trade show floor as well.

The City Campus buildings are right in the heart of Nottingham, and are well served by multiple transport links from across the UK and beyond. The 3-day format of the event has always been attractive to international players, and in 2022 we expect to see even more with Nottingham being on the mainline from the St Pancras Eurostar Terminus, and the venue itself having a tram stop that connects to nearby East Midlands Airport right outside the front door.

This year Britcon will welcome competitors in over 20 different historical competitions and rulesets, with Britcon newcomers such as Swordpoint, To The Strongest!, War & Conquest and Bataille Empire joining longstanding favourites such as DBA, L'Art de la Guerre, Saga, Mortem et Gloriam and The official Bolt Action English Nationals. Even more rulesets will be on table at Nottingham's first ever official Too Fat Lardies Games Day, running at Britcon for the first time this year with a host of Lardy favourites (including Rich and the team!) on full display.

Weekend participants have the opportunity to stay on-site in our student-priced B&B accommodation - there is also a student-priced onsite bar too - allowing our gaming period to run over a variety of different timelines and formats across either a full the "Friday night + 8-8 gaming Saturday + more games on Sunday" timeline, or more traditional 1 and 2 day events and formats. In 2022 accommodation will be bookable direct from the BHGS along with your gaming event ticket

This year entry to the Britcon Trade Show will be FREE, and the show will run from 10-4 on Saturday and 10-2 on Sunday. The current exhibitor list features over 25 traders and demo games (with more being added every week) including companies such as Warlord Games, Forged in Battle, Great Escape Games, Perry Miniatures, The Assault Group, Too Fat Lardies, Donnington, Irongate, The Pit, North Star and many others. We will also be running a ‘Startup Trader’ Zone showcasing small independent vendors who are new to market - expect to see a lot of 3D printing going on!

We look forward to seeing you in Nottingham!
Britcon is supported by :

(I already know I'm going - just take me to the booking form!)

What's happening this year?
What else to look out for...?