DBM at The Challenge 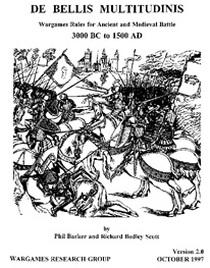 At The BHGS Challenge there will be two DBM period comprising:


The games will be played including the latest 3.3 amendments as published on John Graham Leigh's website except that the amendment allowing Bw(X) to support will not apply to the 15mm event.

The 15mm event is 400 points, and the 25mm event 350 points. Unlike the other periods at The BHGS Challenge will feature only 4 games (2 Saturday, 2 Sunday)

Any list from any book, DBM or DBMM series, is allowed - but not mixing them.

Each period of DBM will only be run if there are at least 6 entries. Should we fail to secure the necessary 6 players we will of course either refund players, or allow them to transfer across to other periods

Admission to any BHGS tournament is at the sole discretion of the organisers and their decision on all matters is final. If any entrant breaches these rules, commits a criminal offence, causes disruption during the competition (including to public, traders or staff at the venue) or causes or threatens to cause damage to property at the venue the BHGS’s representative on the day will be entitled in his or her absolute discretion to require that player to leave the competition and the venue immediately, without any refund.  In such cases we are likely also to refuse entry to future events
Powered by Eventbrite