Britcon 2018 took place over the weekend of 10-13 August in our familiar venue of Manchester University Barnes Wallis building.

The event saw our first outings for Sharp Practice and Test of Honour, as well as around 50% more traders than in recent years and a near-record number of over 180 games in total.

The results for the periods we have so far are published below.

There is also a page of photos from the event available to view here:

DBMM again attracted a strong Irish contingent making up almost a quarter of the total field - making them strong at least in numbers if not in their ability to trouble the trophy engravers this year it would seem!

With "Derby" falling out of the calendar Britcon again hosted Armarti for the first time in many years, attracting a very international field with 4 players travelling from France to take part

Mortem et Gloriam returned in 2018, again with players from overseas - and a rare sighting of someone other than Alasdair Harley at the top of the leader board

Warlord Games again provided a host of prizes for the Bolt Action tournament this year at Britcon, which saw Katie Clewer secure an impressive podium finish (not that she needed to stand on the podium to be taller than everyone else anyway!) 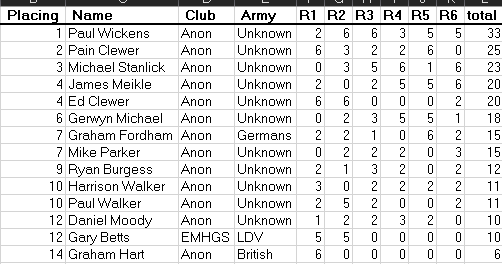 The visually appealing Sharp Practice made a blockbuster start to it's Britcon career, weighing in with 20 players at the first attempt. Prizes were handed out for both French and Allied players, the top 5 in each section being listed below

The Northern Melee attracted a field of 10 players, with generous prize support from Footsore Miniatures. the top 6 placings are listed below:

The Epic results are available on the UK Epic site