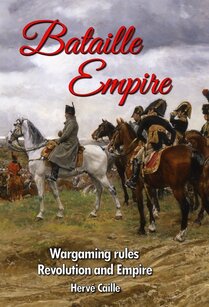 At Britcon this year the Bataille Empire Napoleonic rules will feature for the first time, in a multi-round competition.

This 15mm event will run with 5 games over the weekend (Friday night, 2 games on Saturday and 2 games on Sunday) with;
The timetable is as follows:
These games times may be extended by a few minutes (up to 15) as decided by the umpires.

When time is called there will be a 'hard stop' to the games - put the dice down and work out the result. We know there are pros and cons to this system, but it is the same for everyone and greatly helps the overall organisation of the whole event (we are inputting scores and calculating draws for almost 300 players across 10+ other events too) by preventing games dragging on and holding up the scoring.

Scoring will be done on the usual French system.


Book via the Britcon Booking Page