Prizes for Armati at Britcon 2022 are kindly being provided by our  show sponsors, Forged in Battle 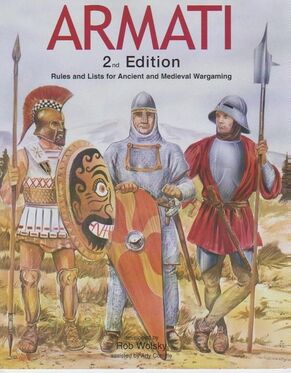 At Britcon this year we will see the return of Armati to the competition for the first time in a number of years.

Armati 2 will be used.

The period being used is Antiquity.

Competitors are invited to provide one or more armies that shall go into a ‘pool’ of armies that will be drawn randomly for each round except for one round of the competitor’s choice they may decide to use their own army. Note that decision must be made on the first day of competition and before the table and the opponent’s draw has taken place (i.e. you might know who you’re playing, but not what army they’re using or the type of terrain you’ll be playing in

In the first round opponents will be chosen at random, there will be no attempt to prevent playing against club members or seeding.

For the remaining games we will use a ‘Swiss Chess’ system again with no attempt to prevent players from the same club being opponents. If the players have already had a game the opponents will be adjusted (this may require some modification for the last few match ups).

Terrain Pieces
Choosing Boards
SCORING
Competitors shall be given a score sheet to be completed at the end of each game. For losers score:
+1 is achieved for half of the winner’s BP killed, rounded up i.e. winner’s loss is 3 BP out of 6 BP or 4 out of 7 BP.
A further point is scored if the winner’s loss is within 1 BP of total i.e. winner’s loss is 5 out of 6 BP the loser scores 2 (1+1).
Player’s will also score in accordance with standard BHGS 32 point system as a ‘goal difference’ to the above. However, in the event of a draw losses are calculated as per matrix on score sheet.

With the proviso that the ‘winner’ of a ‘drawn’ game should never be awarded more than 24 points; or 20 points if the army has the higher initiative.

We will only play four games to give competitors time for lunch and the show on Saturday. Games are programmed to be three hours; games MUST be finished by the programmed time, no new turn to begin within 10 minutes i.e. after two hours fifty minutes.
The onus is upon everyone to try and finish the game in the allotted time, please try to do so.
Saturday Sunday
Tournament organiser: John Bradley – bayleaf@waitrose.com

Book via the Britcon Booking Page