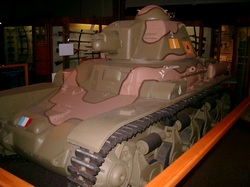 Umpire/List Checkers: Hammy & Nobby (unless they succeed in palming it off on someone else first)

Missions will be drawn from the V4 rule book. It is possible that the mission selection from More Missions may be used but at present this has yet to be finalised.

​The event is planned for 16 teams, so book early!

The venue for the Doubles events in 2017 is Battlefield Hobbies in Daventry. See the Doubles Venue Page for details

Each round the draw is done on a team by team basis with the combined score of the team (as a pair, or for FoW two players) being used to determine their position in the draw. Once the draw has been made in FoW then the two players pair up so that all games are between opposing sides of the conflict.Pairs play is for teams of two players, one playing Axis and the other Allied. Each pair is matched against a similar pair of players (no blue on blue engagements of course!) to play two simultaneous games of singles.

The combined score of each pair is used to determine the draw for each round, and also the eventual winning pair.

The BHGS FoW tournament rules can be found here.

In addition to 1st, 2nd and 3rd place there will also be awards for the best sportsman, best painted Axis and best painted Allied army.