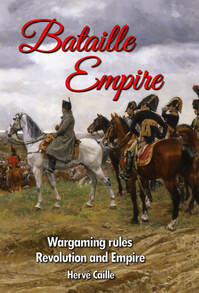 At Roll Call 2020 we will feature the first event for the new mass-battle Napoleonic rules from Herve Caille:

This Napoleonic tournament will use the current Bataille Empire rules, including any clarifications/amendments published prior to the event. The optional rules will not be used.

Games :  Four games of 3 hours maximum, two on Saturday and two on Sunday.

Theme :  All armies of 1813. Any allied contingents should also be valid in that year.

Lists :  200 points maximum. To avoid « bleu » on « bleu » games, the tournament will have equal numbers of French (or subject/allied nations) & Allied players.

Basing: base width can be 30mm to 40mm (but should be consistent within your army) as per the rules. Please contact the umpire if you have questions on basing, or wish to use other frontages and we will do our best to accommodate you.

Movement and ranges: 1MU = 30mm (This is not affected by the unit base width you have chosen for your army).

​Players will describe troop types during deployment. Figures should be as accurate as possible. The umpire can lend figures and armies to those interested in participating.

Tables:  Games will take place on a (roughly) 1.2m x 80cm tables. All terrain will be set-up by the umpire.

Points: At the end of each game, players will count their victory points as described on page 82 of the rulebook.

Teams:  Players will be grouped into French and an Allied team. Each team will then argue amongst themselves / draw lots to designate a Commander in Chief. This will in turn determine initiative and table choices

Table designation:
From the second game onwards, the C-in-C of the team with the fewest points automatically has the initiative.

The only restriction for both C-in-C is that no two players can play each other twice and (at least initially) no player should play twice on the same table.

Team Points:  The scores of all the players of a team will be added together to calculate the team score and the winning team.

An individual score will also be kept for each player to designate the best French & Allied player and overall winner.