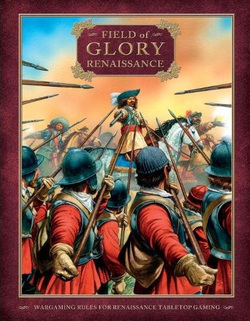 The rules to be used are Field of Glory: Renaissance v1.0  The Umpire will utilise any current official errata and clarifications as detailed on the Field of Glory website.

Competition will use the full rules including the terrain and set-up appendices.

All lists submitted must not exceed the number of points specified in the tournament parameters.

Army lists must specify the number and size of battle groups and their order of march for deployment, and the number and type of commanders chosen. They should also include the territory list for the army.

Once an army list has been submitted it may not be changed or altered other than to correct any errors. Players may only correct their errors by making reasonable changes to their list. It is not allowed to completely re-write the list, and the list checkers decision on this is final.

Figures must be representative and painted and based to an acceptable standard. Players must fully define their troops as they are placed on table. Figures must provide a reasonably accurate representation of the troops they are trying to represent they must not look deliberately misleading.

Table size is as defined in the tournament parameters.

Players must supply their own terrain pieces. These must be to an acceptable standard, and umpires will have the discretion to remove unsightly items.

If a player resigns from a game at any stage after the first set up dice have been rolled their opponents will be awarded maximum points, and they will be awarded 0 points.
When time is called, play will continue until the end of the current phase regardless of which player’s turn it is.