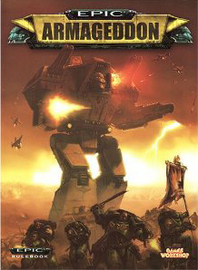 Whilst not part of the 'historical' core of the BHGS - the ever popular Epic Armageddon is another intriguing part of the tabletop gaming community and is always welcomed at Britcon!

At Britcon this year there will again be one Epic period comprising:

Version: Epic 2012.001
All tournaments and competitions need rules and restrictions. Epic-UK tournament rules are a set of guidelines for individuals to use at their own events should they so wish.

Lists to be sent to tournaments@epic-uk.co.uk

Players will compete in a number of games. These will vary from event to event. For more details please refer to the event specific rule set
Warm Up Period

Before battle commences there will be a five-minute 'warm-up' period. Tabletop miniature wargaming is not an exact science. One person's line of sight is another's blocked fire arc and so on. Due to this you should spend five minutes going through things like how the line of sight rules will work, how the terrain features used will work and so on.

Here are some of the things you may want to discuss:
Note we are assuming that players will use some common sense here!