​​Your chance to play!

As well as a host of traders (including a number of first-time exhibitors anywhere on the wargames circuit) this year's Britcon also features a host of participation games as well, so you can not only splash some cash, you can also roll some dice (or flip cards.. etc etc) during your visit to Nottingham's newest wargames show.

This year for your playing pleasure we have the following games on offer:

Not only do Great Escape Games sell loads of cool cowboy-themed stuff, they are also the publishers of the wildly popular Dead Man's Hand Wild West narrative skirmish game too - and this weekend you can try your hand at gunslinging at the DMH Demo Table right in front of their stand. Dead Man's Hand has been successfully delivering truly cinematic-style fast and furious gameplay ever since its' release, so if you've not managed to have a go at restoring law and order to a tabletop Old West then pop along to the Great Escape stand and make sure to have a go this weekend! ​In Her Majesty's Name has undoubtedly been the most popular set of  Victorian Science Fiction and Steampunk narrative skirmish wargames rules ever since its first appearance over a decade ago, and with a lavish and comprehensive 2nd Edition now out in the wild we're delighted to be playing host to a huge and spectacular game of IHMN courtesy of the Chesterfield Open Gaming Society. If you fancy stepping into the world of H.G Wells, Jules Verne, Bram Stoker, Mary Shelley and Sir Arthur Conan Doyle for a while during your visit to Britcon, this is the (fabulous) table to look out for - we've even been told that Craig Cartmell, one of the authors will be in attendance to (steam-powered) walk you through an introduction to the game system on Saturday.

Kore Gaming are using Britcon to give a first outing to their all-new 15mm Sci- Fi Skirmish game, and will be demo'ing it on their stand at the show all weekend. Expect loads of opportunities to get their fantastic 15mm Sci-Fi figures and models on table - including an absolutely HUGE quad-rotor aircraft model that apparently has to be seen to be believed! You'll have to visit Mark on the Kore Gaming stand to find out more - but it’s a fair bet that there will be "pew-pew" noises a-plenty as part of their demo game no doubt!

DAK Attack is a new WW2 skirmish game from author Brendan Wheatley, covering the derring-do and gung-ho actions of the Long Range Desert Group (aka The SAS!) in North Africa. The DAK Attack rules have just been very positively reviewed in the latest edition of Wargames, Soldiers & Strategy Magazine and with Brendan himself running demos Britcon is a great opportunity to dip your toe in the water (well, probably "sand") with these new highly enjoyable and card driven game. Brendan will be running a rolling series of 30-ish-minute demos throughout the entire weekend, with the system supporting as many as half a dozen players at any one time - so with the weather set to be hot it’s the perfect opportunity to sit down and fit a bit of SAS-style action into your visit to Britcon this year
​ 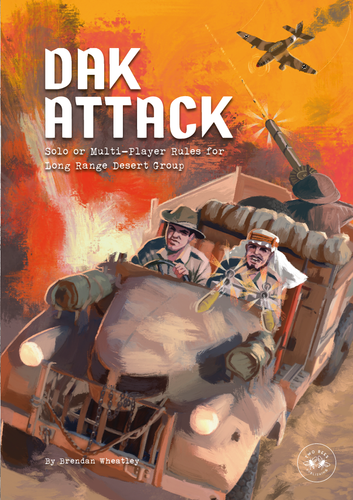 ​The Wings of Glory Aerodrome are a regular and much-loved feature on the UK wargames show circuit, and this weekend in Nottingham will be bringing a veritable hangar-full of gaming systems to Britcon for you to get stuck into. Wings of Glory is the definitive super-easy-to-pick-up WW1 air combat game, and if you're one of the very few gamers who have never played it yourself you'll certainly have seen other gamers hurling their Spads, Albatrosses and Camels around the tabletop skies and having a whale of a time - so whether you’re an ace or a novice why not pop along and ask to join in a round or two of ludicrously colourful air to air combat?

As well as allowing you to be the Red Baron, the core Wings of Glory system has also been extended to cover WW2 air combat, and tweaked even further to take your into the world of Napoleonic Naval gamins, all using the same simple movement and firing system of the original WW1 game - and all three systems will be available to play and try at Britcon this year.

​The Pit are now to all intents and purposes "Mantic (when at a show)" and as part of that awesome responsibility Matt and the gang will be demo’ing Mantic’s Kings of War Armada fantasy naval game at Britcon this year.

Kings of War Armada shares a lot of its' gaming DNA with Warlord Games' Black Seas, making it very easy to learn and play - but in porting (see what we did there..?) the setting over into Mantic's Kings of War universe means the opportunities for generating loads of very different fleets, all with their own unique feel and playstyle, are hugely expanded. Fancy trying your hand at bellowing out "RAMMING SPEED CAPTAIN!" in Orcish? The Pit stand and KoW Armada demo needs to be on your Britcon agenda!

Kings of War Armada is very easy to learn and play, even with the optional rules. The current 2 forces feel unique in their playstyle and the included fleets in the starter-set provide some great games. There are 10 scenarios included in the rulebook for those looking for more than just knocking fleets together.
​
For those looking for a fantasy ship game, the scope for expansion with Armada is huge with Mantic’s Kings of War setting. You will also be able to play Armada as the Kingdoms of Men with the correct scale ships you may already have when the rules are published. Armada doesn’t have a huge amount of rules detail in terms of ships taking damage to specific sections, as the combat system is streamlined for easy and quickness of play. It does have a lot of flexibility in force building with the optional upgrades, and that can only expand as more factions become available and the game grows. 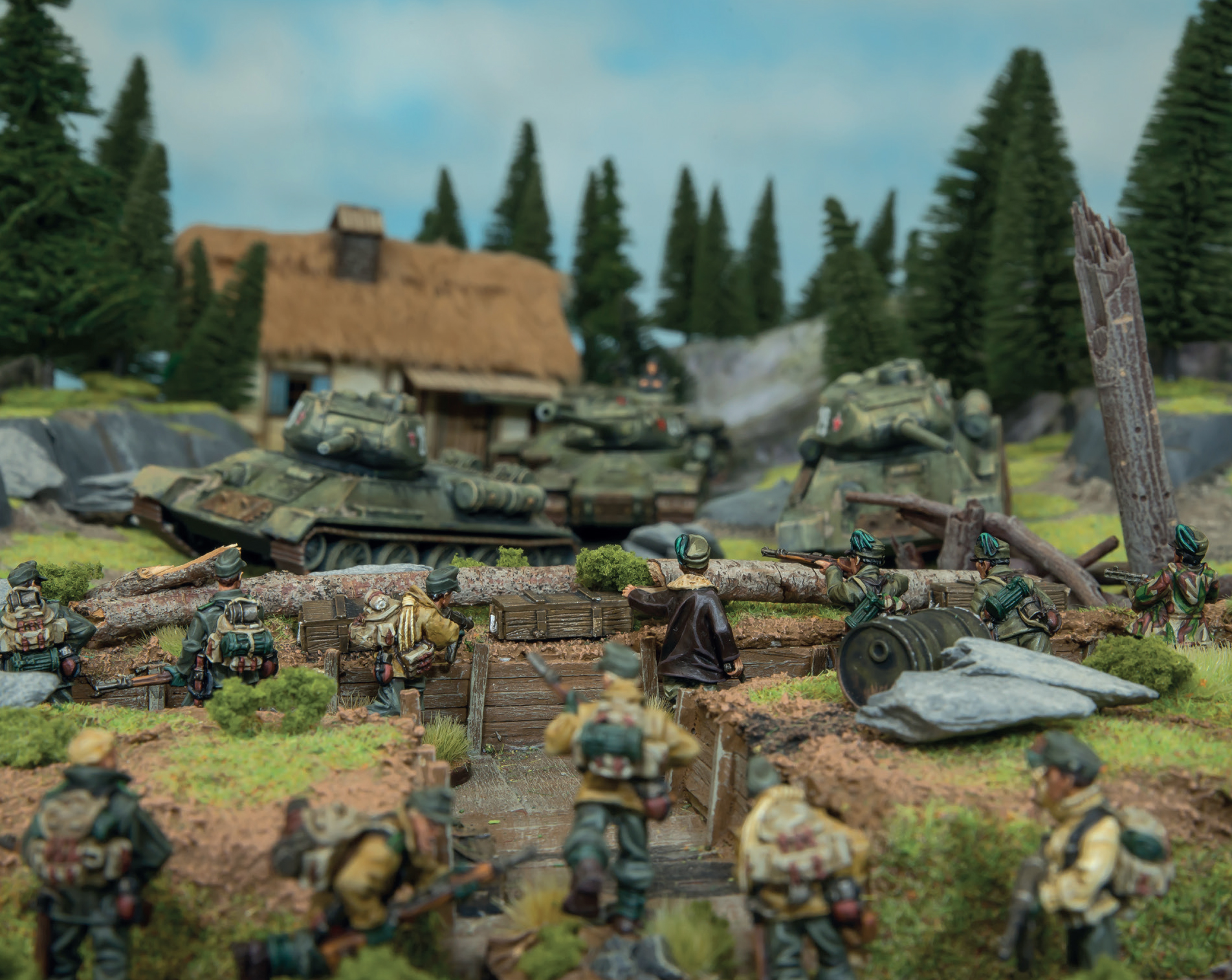 As well as this diverse mix of miniatures games, Britcon will also feature a dedicated Board Game & Roleplay Room, hosted by the Nottingham Board and Wargames Group. Located in Lecture Theatre 8 (on the right hand side of the main competitions area) the room will be set up for you to come along and use the space to play your own games, or to borrow games from the extensive library of popular titles all provided by Gary and his team. There will also be opportunities to take part in game-testing, with some as-yet unpublished titles on the tabletop, all of which are keen to get your feedback as playtesters over the weekend of Britcon 2022 ​

Warlord Games need no introduction - and especially so at a show running in their home town of Nottingham. The Warlord rules portfolio covers some of the most popular and well known titles in the industry, and they will be demo'ing a number of them on their stand at Britcon this year (just in case you haven't already tried them). The systems they'll bring depends on which staff are available on the day, but we're pretty confident you will be able to try your hand at Bolt Action, Black Seas and perhaps even their new 200AD Celtic-themed skirmish game Slaine