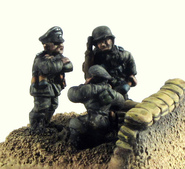 The BHGS Pairs is a relatively new event for FoW. This year it is colocated with the FoG:R Doubles

For FoG:R the competition will be a more traditional Doubles format with two players sharing command of a larger than normal army drawn his year from any book, any list as long as it is legal in 1695, 1000 points.

The 2013 competition will be held on 26th/27th October at Wolvercote Village Hall near Oxford.

Each round the draw is done on a team by team basis with the combined score of the team (as a pair, or for FoW two players) being used to determine their position in the draw. Once the draw has been made in FoW then the two players pair up so that all games are between opposing sides of the conflict.